So as you can tell I’ve been doing a pretty horrible job posting reviews on a regular basis. I’ve been crazy busy trying to keep up with kids, work, emails, and finding time to read. Hopefully I can get my organizing skills working again. So to keep myself focused and on task I decided to have a Saturday Author Spotlight. Since I’ve been receiving A LOT of emails from authors wanting me to read their books, I wanted to give them their own day! Every Saturday I will post a review from a new or unknown author that’s trying to get their book out there and have them in the spotlight for the whole week until the next Saturday. These post will of course, have a review on the author’s book but could also include a Q&A, cover reveal, a guest post, or anything else I can think of to help promote their book. There are some great authors out there that deserve a chance to be heard and have their books read. And I’m always up for suggestions on how I can make my blog better for readers and authors alike, so don’t be afraid to shoot me an email!

“Are you happy with your life?”

Those are the last words Jason Dessen hears before the masked abductor knocks him unconscious.

Before he awakens to find himself strapped to a gurney, surrounded by strangers in hazmat suits.

Before a man Jason’s never met smiles down at him and says, “Welcome back, my friend.”

In this world he’s woken up to, Jason’s life is not the one he knows. His wife is not his wife. His son was never born. And Jason is not an ordinary college physics professor, but a celebrated genius who has achieved something remarkable. Something impossible.

Is it this world or the other that’s the dream? And even if the home he remembers is real, how can Jason possibly make it back to the family he loves? The answers lie in a journey more wondrous and horrifying than anything he could’ve imagined—one that will force him to confront the darkest parts of himself even as he battles a terrifying, seemingly unbeatable foe.

Dark Matter is a brilliantly plotted tale that is at once sweeping and intimate, mind-bendingly strange and profoundly human—a relentlessly surprising science-fiction thriller about choices, paths not taken, and how far we’ll go to claim the lives we dream of.

I absolutely loved this book! There were plenty of OMGs and WTHs throughout that kept me on the edge of my seat the entire time. I completely feel in love with Jason’s character but how can you not love a man who will stop at nothing to get back to the woman he loves (heart strings pulled). And we’ve all had those moments where we’ve wondered what life would have or could have been like if we’d done some things differently. Like saying yes to something instead of saying no. Leaving someone instead of staying. Or even staying at your ‘safe’ job instead of quitting and following your dreams. I know I definitely have had those moments. This book was more than just a good thriller, Blake Crouch made you think about your own wants and dreams, plus the possibility of having a do over. I feel like that is what made it such a great read. 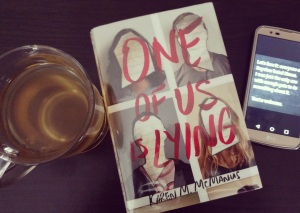 Bronwyn, the brain, is Yale-bound and never breaks a rule.

Addy, the beauty, is the picture-perfect homecoming princess.

Nate, the criminal, is already on probation for dealing.

Cooper, the athlete, is the all-star baseball pitcher.

And Simon, the outcast, is the creator of Bayview High’s notorious gossip app.

Only, Simon never makes it out of that classroom. Before the end of detention Simon’s dead. And according to investigators, his death wasn’t an accident. On Monday, he died. But on Tuesday, he’d planned to post juicy reveals about all four of his high-profile classmates, which makes all four of them suspects in his murder. Or are they the perfect patsies for a killer who’s still on the loose?

Everyone has secrets, right? What really matters is how far you would go to protect them.

I really don’t have much to say about this one. I was kind of disappointed by this mystery novel. Even though it did have me constantly changing my thoughts on who killed Simon, I was still hoping for more surprising twists and turns. It didn’t have me on the edge of my seat and I really wasn’t all that surprised by the outcome of who actually did it. So instead of the “OMG, no way!”, it was more of an “Oh, okay”. Overall it wasn’t a bad book and even though someone died it still had a happy ending.

SIDE NOTE: Now even though it wasn’t my greatest read, I think this novel will hit home for a lot of teens. Even with this novel being a murder mystery it still touches on an all too familiar issue that every teenager has had to face. Acceptance. Whether it’s being accepted by your friends, family, teachers or classmates. No one wants to be left out and some rejections can kill a person. 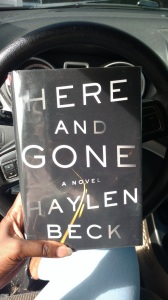 Audra just wants to reach california. She’s finally found the strength to flee her abusive husband and make a fresh start for her two children. With little Sean and Louise in tow, she has carefully made her way across the country, taking back roads and avoiding attention.

So when an unsettling local sheriff pulls her over in the middle of the Arizona desert, Audra works to hide her nerves and keep calm. She has to. But then he pulls a bag of drugs she;s never seen before out of her trunk, and nervousness turns into panic. She thinks the worst has happened.

Unfortunately, she’s wrong. The worst is yet to come.

“Please,” she said, unable to keep the quiver from her voice. “I’ve done everything you said. I’ve been cooperative. Please tell me where my children are.”

“What children?” he asked

How two words can become a mother’s worst nightmare. All Audra Kinney wanted to do was keep her kids safe. But when she gets pulled over and arrested by a small town sheriff, her whole world takes a turn for the worst. Once Audra is at the sheriff’s station and behind bars she asks again where her children are and is taken back by the sheriff’s statement, saying that there were no children in the car when he pulled her over. Now accused of harming and possibly killing her children and hiding their bodies, Audra desperately tries to tell the FBI who have now come in to investigate that she is not the one they should be after. But with her troubled past it seems no one will believe a word she says. So is she telling the truth or is she what everyone thinks she is? A killer.

I could not put this book down! As a mother of two children who are actually the same age as the children the book right now, I was on an emotional rollercoaster. Haylen Beck (aka Stuart Neville) did an absolutely wonderful job telling the story. I felt as if I knew the characters personally and was right there with them. I found myself crying with Audra and also screaming with her and at her saying “No! You’re not crazy! Snap out of it!”. I also thought a lot about my own children and wondered how far I would go to save them. This is a definite must read.

Arriving at his fifth school in as many years, a diplomat’s son, Osei Kokote, knows he needs an ally if he is to survive his first day so he’s lucky to hit it off with Dee, the most popular girl in school. But one student can’t stand to witness this budding relationship: Ian decides to destroy the friendship between the black boy and the golden girl. By the end of the day, the school and its key players – teachers and pupils alike – will never be the same again.

The tragedy of Othello is transposed to a 1970’s suburban Washington schoolyard, where kids fall in and out of love with each other before lunchtime, and practice a casual racism picked up from their parents and teachers. Peeking over the shoulders of four 11 year olds Osei, Dee, Ian, and his reluctant girlfriend Mimi, Tracy Chevalier’s powerful drama of friends torn apart by jealousy, bullying and betrayal will leave you reeling.

It’s amazing how one little rumor or lie can create such disaster. How so much hate and jealousy can make people do unthinkable things but in the end hate will always destroy you. Even today things like this happen all the time. I have seen friends turn on friends and relationships destroyed over he said she said. All it takes is one small stone to make a huge ripple in the water.

Starting this book I was intrigued by the storyline, not knowing what to expect since I have never read Shakespeare’s Othello (in school or now), nor did I know about the Hogarth Shakespeare series. But once I got into reading the book it started to remind me of a movie I saw years ago called “O” that came out in 2001 that I found out was also based on Shakespeare’s Othello. Even though the plots were the same I enjoyed it from a child’s point of view and how they handled every situation. From love, hate, jealousy, and racism. It was beautiful and heartbreaking all at the same time.